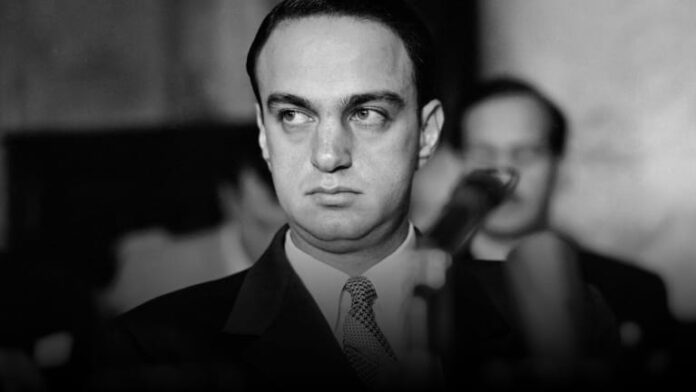 On February 20, 1927, Roy Cohn is born to Jewish parents Dora and Judge Albert C. Cohn. He will grow up to be the most blatantly corrupt attorney New York City has ever seen.

And he will mentor Donald Trump.

Less than a year or two after Cohn passes the New York State Bar Exam, he begins working in a U.S. federal prosecutor’s office — a job his father snagged for him, just like Donald Trump.

Cohn and his boss, U.S. Attorney Irving Saypol, star in the national outrage surrounding the prosecution of a husband and wife accused of being communists. Evidence emerges that the couple are innocent, much like the Central Park Five that Trump wrongfully accuses of murder.

Cohn moves up in the world of politics, going on to work as the right-hand man to Senator Joseph McCarthy. Together, they begin purging federal employees based on unsupported claims.

Not before long, Cohn is using taxpayer dollars to take personal trips with a love interest, under the guise of government business. When things start going south for Cohn’s desired relationship, he launches a legal attack on the U.S. Army for getting in his way. But he doesn’t have a case against the military, so he falsifies evidence.

Then, Roy Cohn meets Donald Trump. If you ask Trump, they met in 1973, just in time for Cohn to represent him in a lawsuit by the government. If you asked Roy Cohn while he was still alive, they met around 1969.

See the Roy Cohn archives here to find out what happens next.

The Dept. of Justice sues Fred & Donald Trump for discrimination

Donald Trump signs Ivanka up to model for Elite pedophiles

Roy Cohn dies of AIDS after Donald Trump ditches him