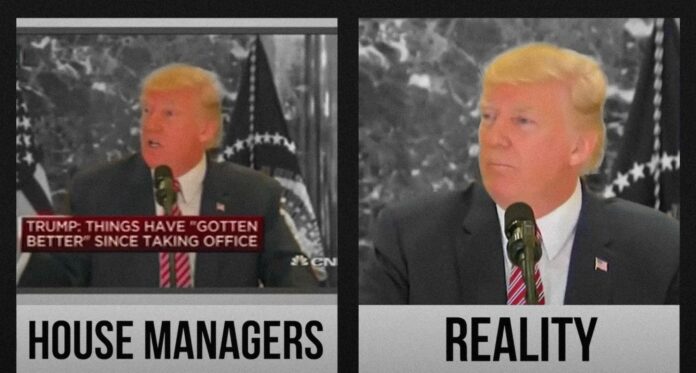 Trump’s defense, now joined by a third attorney, Michael van der Veen, claims that Democrats have no evidence for any of their claims because everything they know comes from news reports. Reports, they say, aren’t proof.

The defense goes on to show clips of the former president talking about law and order over uplifting music. The clips are intertwined with clips of Democrats supporting Black Lives Matter protests, set over dark, dooming music.

These “manipulations” are simply clips of full videos. To make their point (and to take up time), the attorneys play back-to-back videos of the House’s clips followed by much longer clips.

Then, the attorneys argue that Trump’s calls for violence are free speech. To back this up, they show one-second clips of Democrat after Democrat saying the word “fight.” Sometimes the full clip is about “fighting” the coronavirus. Sometimes the clip is referring to political opponents. In any case, Trump’s defense does exactly what they just accused Trump of: “manipulating” videos.

The biggest difference between clips of Trump used by the House and clips of Democrats used by the defense? No one stormed a federal building and threatened to murder government officials moments after a Democrat said “fight.”

Trump lifts sanctions on an Israeli billionaire for Alan Dershowitz

Donald Trump orders the assassination of a U.S. citizen